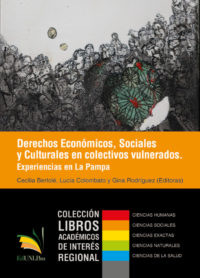 This collective volume is part of a series of activities of the research group “Human Rights, International Protection Systems and Local Public Policies” based at the College of Economics and Law, National University of La Pampa, and gathers results from a research line which had its origins in 2012. Along these years, our interest has been to study and understand the wide process, which emerged by the end of the 20th century, by which the Latin American region began to incorporate the human rights perspective as common ground in the formulation and implementation of public policies dealing with specially vulnerable groups such as women, children, native populations, people with disabilities, elderly people, etc. We found that this itinerary is being crisscrossed by tensions and contradictions inherent to a region characterized by high levels of inequality and by persistent gaps in the processes of democratic consolidation. The “human rights issue” constitutes, thus, an area of contention in which different discourses, institutional and normative aspects and individual and collective practices are articulated and at the same time question the political agendas of Our America from the perspective of social movements and the civil society. However central their role may be, this field of study which turns around the incorporation of Economic, Social, Cultural and Environmental Rights in the province of La Pampa is not really developed. With this work we intend to provide analytical and conceptual elements which may contribute to the development of mechanisms and experiences that can promote, strengthen and delve into non-regressive local strategies of human rights protection in specific collectives such as women, children, native populations, people with disabilities and elderly people. The book is composed of six chapters which describe and problematize issues related to the normative recognition of DESCA in Argentina and in particular in the province of La Pampa, the challenges faced to grant and effectively protect them, and the possible means leading to their consolidation.